As you know, the road to Global Elite is challenging, but between silver and GE are many different ranks. In the following picture, you can see the distribution of CS:GO ranks: 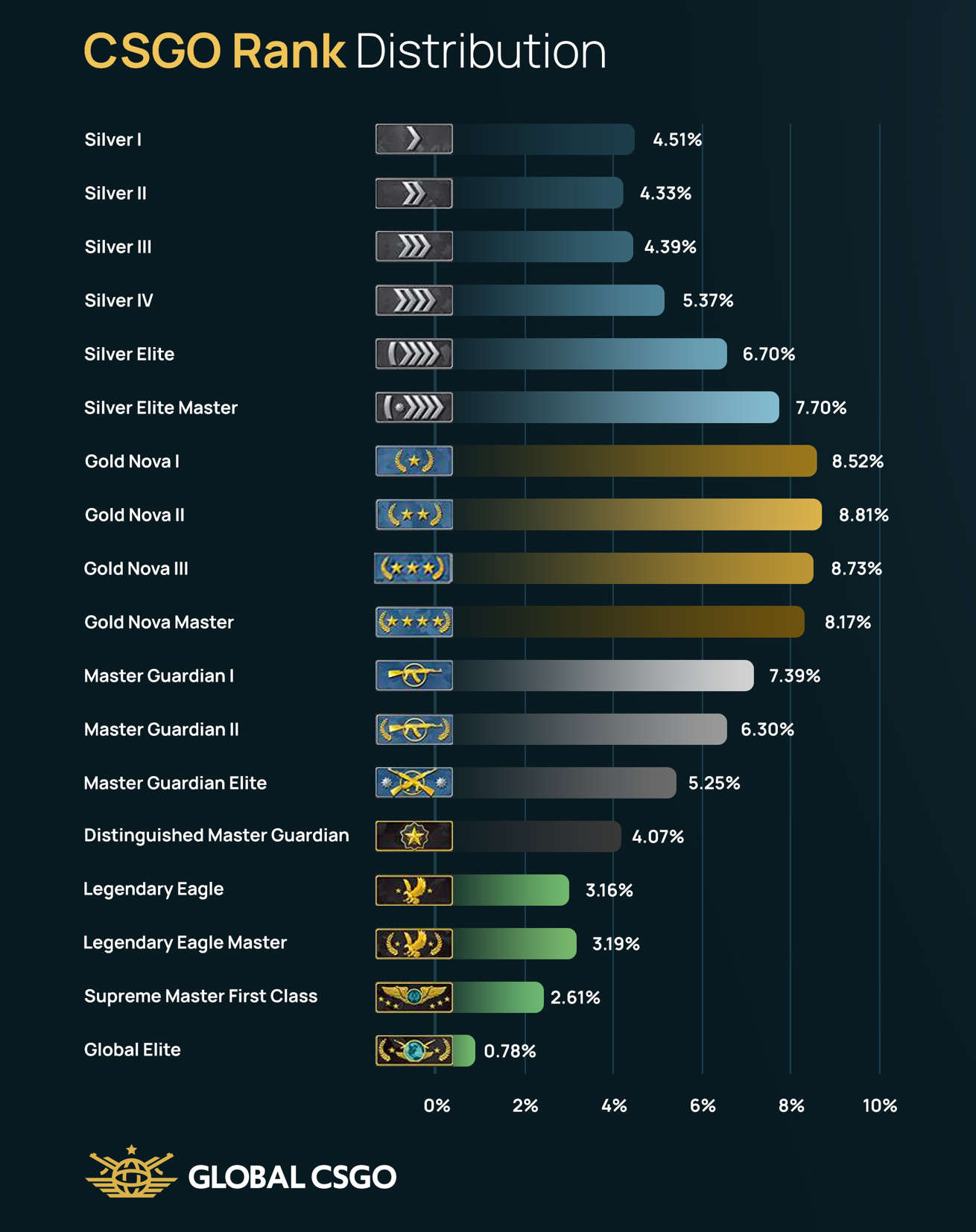 The CS:GO ranking system can be a confusing topic to tackle for new players to the game. You start off without a rank, and after a set number of matchmaking you’ll receive one relating to your skill. But what exactly does this rank mean? What decided it, and where can you go from there?
In this detailed guide, we’ll cover everything you need to know about CS:GO ranks including a list of all 18 ranks in the game and what you can do to rank up quicker. Use the buttons below to quickly jump to a section that you need help with:

Getting Your First Rank

Starting things off at the beginning is how to get your first rank in CS:GO matchmaking. To get your rank, you first need to be level 2 to queue for competitive. You can increase your level by playing the more casual game modes in CS:GO such as deathmatch and casual. Doing so will equip new players with the basic skills they need to play in the more serious matchmaking.

Once you’re level 2, you need to win 10 games of matchmaking to be placed into a rank. While you’re collecting these wins you’ll be classed as unranked. After you’ve won those 10 games, you’ll have earned your first rank. This will usually be somewhere on the lower rungs of the list of ranks, but could be higher if you’ve played some form of Counter-Strike before.

Silver I is the lowest rank you can receive, and The Global Elite is the highest rank in the game. From that you can see the flow of how the rank system works in CS:GO.

How to Rank Up

Ranking up in CS:GO is simple, though the algorithm behind it isn’t. To put it plainly, the more matchmaking games you win the faster you’ll rank up. As you’d expect though, there is more that goes into it than just that. Here is what will influence the speed in which you rank up.

What ranks your teammates are. The lower their rank, the more elo (the value that dictates your rank) you’ll earn from a win.
What ranks your opponents are. The higher their rank, the more elo you’ll earn from a win.
The number of times in a game of matchmaking you are named the MVP.
The round difference of the competitive games you play. You’ll gain more elo by beating a team 16-1 than you would if you beat them 16-14. On the flip side, you’ll lose more elo if you get stomped by a team 16-1 than if you only narrowly lose 16-14.

Tips to Rank Up Faster

If you’re stuck in a “rank plateau” (unable to move up in the rankings for a long time), or just want to progress through the ranks at a faster rate than you currently are, we have a collection of tips and suggestions to help you rank up.

1. Play With a Party

Playing with a friends in a party is a great way to assure that your teammates cooperate and want to win. Starting a solo game, or game with just a single friend, is like playing Russian Roulette – but instead of a bullet firing from a gun, it’s whether or not you’re queued with a griefer, bad player, or player who doesn’t want to play with your team.

By playing with your friends, you can assure that everyone has a microphone and wants to play with the team. You can employ strategies like rushes and executes together, and won’t have people running out onto bombsites alone with the bomb on terrorist side!

Often after losing a game, players immediately rush into another game straight after out of frustration, and hope to win back their lost elo. This is bad because you play a lot worse when frustated (you are less patient, more likely to annoy your teammates, less focused), and also (most imporantly) because you haven’t worked out what went wrong in the last game.

Everyone has a favorite map on CS:GO. One where they know a few more strats than they do for other maps, or a few more smoke lineups. It only makes sense then that if you’re trying to rank up as fast as possible then you should play these maps the majority of the time.

Even better, if you’re a master of one of the maps the community doesn’t play as often like Cobblestone or Train, then you’ll likely be playing against players who don’t know the map quite as well. This is just another small thing you can do to ensure you get the most matchmaking wins possible where you shine as much possible, thus accelerating your climbing of the CS:GO ranking system.

4. Train Your Aim and Practice Grenades

Even after thousands of hours, players are still far from mastering CS:GO. There are lots of different aspects and skills required to be good at Counter-Strike (or any FPS), but there are a few crucial skills that you need to practice. Two of those skills are training your aim and practicing smoke grenades.

There are many ways to train your aim, here are just a few:

Would a football player play with incorrectly sized studs? Or, a tennis player play without the perfect racket? No! There are lots of optimizations, changes, and personalized adjustments you can make to greatly improve your game and peripheral setup.

Firstly, make sure that you have HRTF enabled in your audio settings. HRTF allows you to better hear where sound comes from – this comes in especially handy when pinpointing footsteps that you’re not too sure of the exact location of.

Everyone has different optimal mouse settings, but there are a few things you can do to help find those optimal settings:

Enable raw input (in CS:GO mouse settings) – this makes the signals your mouse sends go directly to CS:GO, instead of being changed/slowed down by Windows or other applications.
Aim for a lower sensitivity – you can do this by lowering your sensitivity by 0.01 every few days until you find the best speed. A lower sensitivity means you can more accurately make small adjustments, like moving your crosshair slightly to the left to make sure you hit a headshot.
Have a good quality, big mousemat – this might not be possible if you don’t have the funds or room where your mouse is, but a larger mousemat means you have to pick up your mouse less, and a high quality mouse mat will make your mouse more accurate.

What ranks can play together in CSGO

Yes. However, there are certain limitations to that rule, meaning the unranked players can play with those from "Silver 1" to "Master Guardian 1". This disables high-rank smurf accounts and boosting companies are unable from mixing along with the low ranks, which protects the overall quality of the matches.

How Does CSGO Ranking Work?

CSGO ranking system is pretty simple and easy to understand. You win games in order to get to the higher ranks. You are not allowed to skip ranks, as you can progress only one at a time. The more games you win, the faster you go up.

How many games does it take to rank up in CSGO?

Ten matches. Before you get ranked, you will get mixed with different levels of players, that is just how basic matchmaking works. Once you get ranked and advance to the top, you will play with those approximately close to your skill level.

How do you rank up in CSGO?

By winning games. The more games you win, the more XP points you get and the faster you advance through the ranks. There are additional points to be won by achieving good individual and team stats, winning rounds, and staying consistent.

How many ranks are in CSGO?

Eighteen. They are separated into six different tiers, each of them consisting of subcategories that determine how good of a player you are in terms of skills and experience. From the "Silver 1" which marks the starting point of the journey, a player must climb all the way through matches.

What is the Highest Rank in CSGO?

Global Elite. This is the highest of ranks and it shows a lot about a player - skills, time, and effort he had to put in to get there. A small percentage of players manage to enter this rank as it is reserved for only the best of the best.